Listen to recordings by the Punch House Band! Watch videos of the band! You can do all of that on this one page!

One Saturday night during late lockdown in May 2021 we did a livestream show live & direct from Gorleston on the sunrise east coast of Norfolk, England. Massive thanks to Wendy House Studio there for taking us as one of their Little House concerts, a brilliant grassroots pandemic initiative to support local music. Here’s the video, featuring a dozen-or-so PHB classics.

In early 2019 we shot three music videos, with live recordings of songs, in the wonderfully atmospheric 12th-century undercroft that is today Jurnet’s Bar in King Street, Norwich.  The videos were filmed, recorded and edited by our favourite cameraman Al Pulford.

First up is ‘Masquerade’, a song co-written by Tim a few years ago for a production of A Midsummer Night’s Dream. This one is a favourite near the end of a set in our live gigs.

Next we play ‘I walk by night’, a song written by Tim after he read the 1935 memoir of the self-styled and anonymous ‘King of the Norfolk Poachers’, I Walked by Night.

You can see more videos of songs from gigs on the Punch House Band YouTube channel.

We went into the studio with sound engineer Chris Bond one afternoon in 2017 and recorded half-a-dozen songs for our first CD EP, Songs From the Big Sky. Here are a couple of those recordings. Alright, three then.

We played the music for the 2018 summer touring production by Crude Apache Theatre Co. of their play about life on the Norfolk Broads, sailing the wherries, At the Turning of the Tide. Here is the film of the show at Whitlingham Broad, which starts with a couple of numbers by the band. There are four or five other songs by the Punch House Band through the show as well.

Now you’ve heard and seen us virtually, book us to play live. 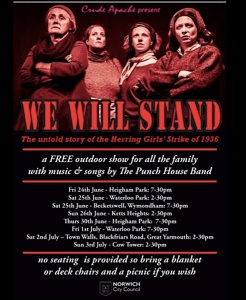