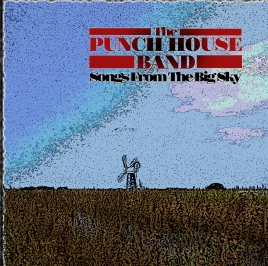 Punch House Band are very pleased to say that their first CD, the Songs From The Big Sky EP, has been released and is on sale at all gigs starting at the Rumsey Wells show in their Winter 2019 tour around Norwich and Norfolk. It’s a six-track affair recorded and engineered by Chris Bond of Seaplane Studio in Norwich, and features songs which have become mainstays of the band’s live set.

The tracks are mostly originals. Three are by Tim: ‘The big sky in the east’, ‘The ghost of Allan Smethurst,’ and ‘The bricks of Burston’. Two are by Leighton: ‘A box in a hole in the ground’, and ‘Back to the dirt’. It rounds off with the trad. ‘Bedlam Boys’ arranged by the band. You can preview some of the songs on the band’s reverbnation page here. Better still, you can buy the CD, very reasonably priced, at gigs.